Skip to content
Trade Knowledge Exchange > Commentary > The “Canada model”: is it a viable option?

Could the future relationship between the UK and the EU take on a Canadian flavour? That is the proposal put forward by Boris Johnson in the run up to the Conservative Party’s conference. In an article on 28 September, he called for a “SuperCanada” agreement as the model the UK and the EU should adopt after “Brexit”. Experts on branding will decide whether the designation “SuperCanada” is more appealing than the Comprehensive Economic and Trade Agreement (CETA) title bestowed on the free trade agreement concluded between the EU and Canada, and which the UK will be a party to until it leaves the EU. The question is whether it is an economically viable outcome.

It is worth noting that the idea of using Canada as a reference point is not new. Indeed, in perhaps an unexpected meeting of minds, a Canada-style model is  also set out in the EU’s March 2019 negotiating guidelines as the likely option if the UK were to abandon its commitment to one or more the principles of the single market. Since the UK government’s White Paper  (or “Chequers” position) does precisely that, the EU’s line has not departed substantially from its initial offer, as was seen at the recent Salzburg summit. Given all this, what can we say about the Canada option?

The first thing to observe is that the “Canada” label (regardless of the whatever adjective is affixed to it) is really a short-hand for a preferential free trade agreement (FTA), of which CETA is one example. Others include any of the recent FTAs signed by the EU (for example, with Singapore, Japan or Korea) or by Canada (such as the tortuously named Comprehensive and Progressive Agreement for Trans Pacific Partnership, another agreement that is surely begging for Johnsonian re-banding). What all these agreements have in common is that parties to them use their WTO commitments as the baseline, and then build on these. How far this process delivers additional liberalisation depends on the sector or issue covered. In goods, they will usually phase out existing tariffs – which are relatively limited on trade between industrial countries – say on cars or textiles . Commitments on agriculture may be more limited, and so, (for reasons explained below) is the extent of real liberalisation in services.

From a EU standpoint, a Canada-type FTA represents a deepening of liberalisation between two parties trading on WTO terms. But it also represents a significant weakening of integration  compared to the single market.  This is particularly clear in services: FTA’s signed by the EU involve commitments that go beyond WTO commitments, but since actual services trade regimes are in practice much more liberal than the WTO commitments, what the FTAs do is to “bind” the parties to not rolling back on existing levels of liberalisation. The commitments do not, by and large, produce further liberalisation and fall well short of the levels of integration and liberalisation generated within the EU (incomplete as that may be).

From the standpoint of the likes of Johnson, the Canada model represents progress because: (i) it is a more tried and tested  model than the Chequers model (ii) it preserves deep integration with the EU while allowing the UK to develop its own trade policy vis a vis the outside world. Point (i) is correct and indeed it is shared the EU. The Chequers position is highly experimental, containing a number of proposals that have never been attempted in trade policy on any scale. Moreover, neither the EU nor Johnson believe that key aspects of the Chequers proposals, especially those on customs, are workable.

Point (ii) is largely incorrect. This may be partly a misunderstanding by Johnson and others as to what Canada type agreements involved. Take services: Johnson thinks that the negative-list approach followed by CETA would involve blanket liberalisation of services except when parties state otherwise. The problem is that if you look at the annexes to CETA, which is there the meat of the deal is on services, we find that these annexes essentially reflect the existing state of play in Canada and the EU. As the EU puts it “ [CETA] ensures legal certainty for EU and Canadian services suppliers and investors by binding the actual level of liberalisation in the open economies of Canada and the EU”. (Emphasis added). Or take government procurement. FTA’s like CETA open up procurement more than under WTO disciplines, by expanding the WTO lists of covered activities and sectors. But these provisions are still  less comprehensive than EU procurement law and offer weaker means of redress. On regulation, Canada-type FTAs involve enhanced modes of cooperation and recognition by parties, but they do not involve harmonisation as in the EU, or a say in the development of the rules.

We can model the effects of FTAs under various configurations. As we have have emphasised elsewhere, the range of such effects depends on their depth. By depth we mean the scope of liberalisation commitments against the baseline. The main thing to recall in the context of the UK and its relationship vis a vis the EU is the starting point: whereas very other FTA in force involves parties deepening commitments vis a vis the WTO baseline, if the UK and the EU were to negotiate a FTA, the baseline  would the UK’s membership of the EU’s single market. This in turn represents the deepest example of regional integration between sovereign states currently seen in the world. Consequently, movement toward a more traditional FTA  – whether Canada or other – would necessarily involve moving to a shallower level of integration.

The chart below shows losses in trade under three different scenarios. One in which the UK retains a deep FTA on goods, involving harmonised regulation, and leaves the single market on services. This can be taken as an approximation of the “Chequers proposal” (with the necessary caveats stemming from the untested nature of that proposal).  The  middle bar represents the effects of leaving the UK and signing a FTA that resembles the one between the EU and Canada. The right bar gives the losses incurred by a hard/ no-deal exit. 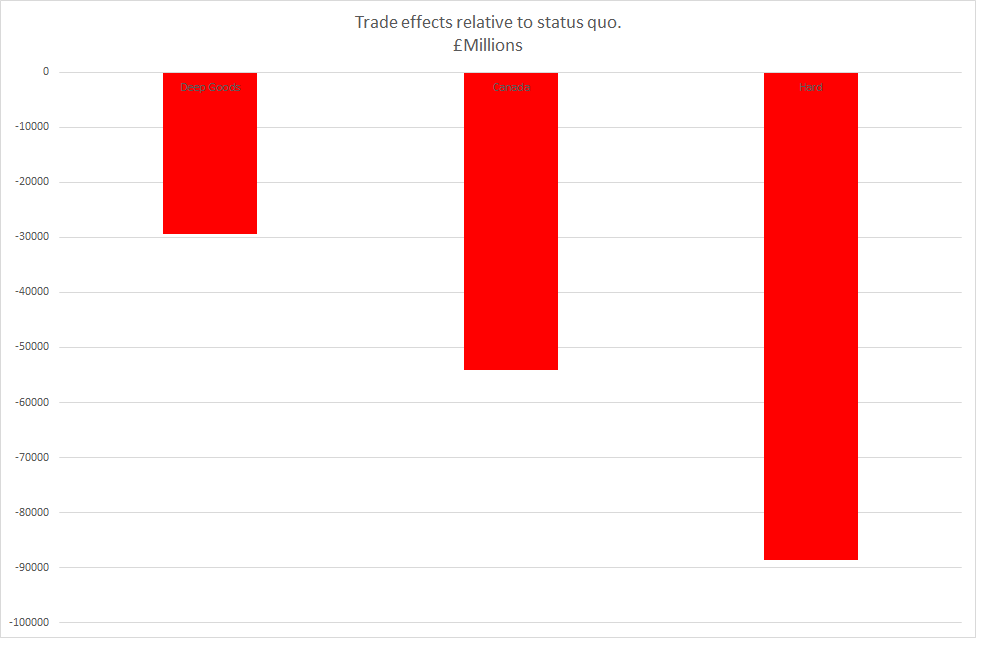 Under the Canada approach, some of the losses avoided with a hard exit are avoided, but the losses are still substantial. The result explains why the option is presented by the EU as “the most” for which the UK can aim given its stated “red lines”.

But what about a SuperCanada approach?. In line with the reasoning developed above, one option would be to deepen commitments normally found in standard FTAs. But in order to make a dent in the projected losses, the commitments would need to go deep into goods regulation (as with Chequers)  and also deepen commitments in services, along single market lines. Neither seem to be on the cards, politically at least, for the proponents of the SuperCanada approach.

An alternative, is that what is “Super” in the approach is less what it means for the UK’s dealings with the EU, and more in what it allows the UK to do with the rest of the world in terms of striking FTAs. That would square with one of the main criticisms of the “Chequers” position, namely that it is difficult to square with the UK’s aspirations to an independent trade policy. Those criticisms  are valid. The main difficulty is that in order for the UK to have any chance of offseting the losses on its EU-facing trade as a result of a Canada style agreement, it would need to complete deep free trade agreements (i.e. ones that resemble single market arrangements the UK enjoys with the EU), with all its main non-EU trading partners. It is unlikely that this will be feasible on any realistic time frame, especially given significant differences in regulation and public policy between the UK and potential partners like the US.

The “SuperCanada” option is a variant of standard FTAs concluded by the EU with many  other parties that are not EU member states. It is also a variant of the arrangement proposed by the EU should the UK stick to its red lines. Its problem is not therefore that it is unworkable. Indeed, because it draws on well established procedures it seems a priori more workable than the much more experimental Chequers agreement. Its main drawback lies in its economic costs. The “Super” moniker does little to assuage fears on that front, especially given the paucity of details provided. It is, of course, possible to enhance or “super-size “the current FTA the EU (and the UK so far) enjoys with Canada. But doing so would take the deal more in the direction of what is in Chequers, or in the current single market, neither of which seem to be what the proponents of SuperCanada have in mind.

On balance, the current options before the Conservative Party seem to involve choosing between an approach (”SuperCanada”) that is based on existing practices, but that will likely inflict substantial damage; or one  (Chequers) that is better at limiting damages but that is highly experimental. And that is setting aside vexed questions related to the Irish border.

For political reasons, proponents of the SuperCanada approach may see deeper integration with other trade partners (such as the US) as preferable to deep integration with the EU, because they are philosophically sympathetic to the policy changes that would involve. But if that is so, the case should be made on those grounds, and not by reference to the economics of free trade agreements.